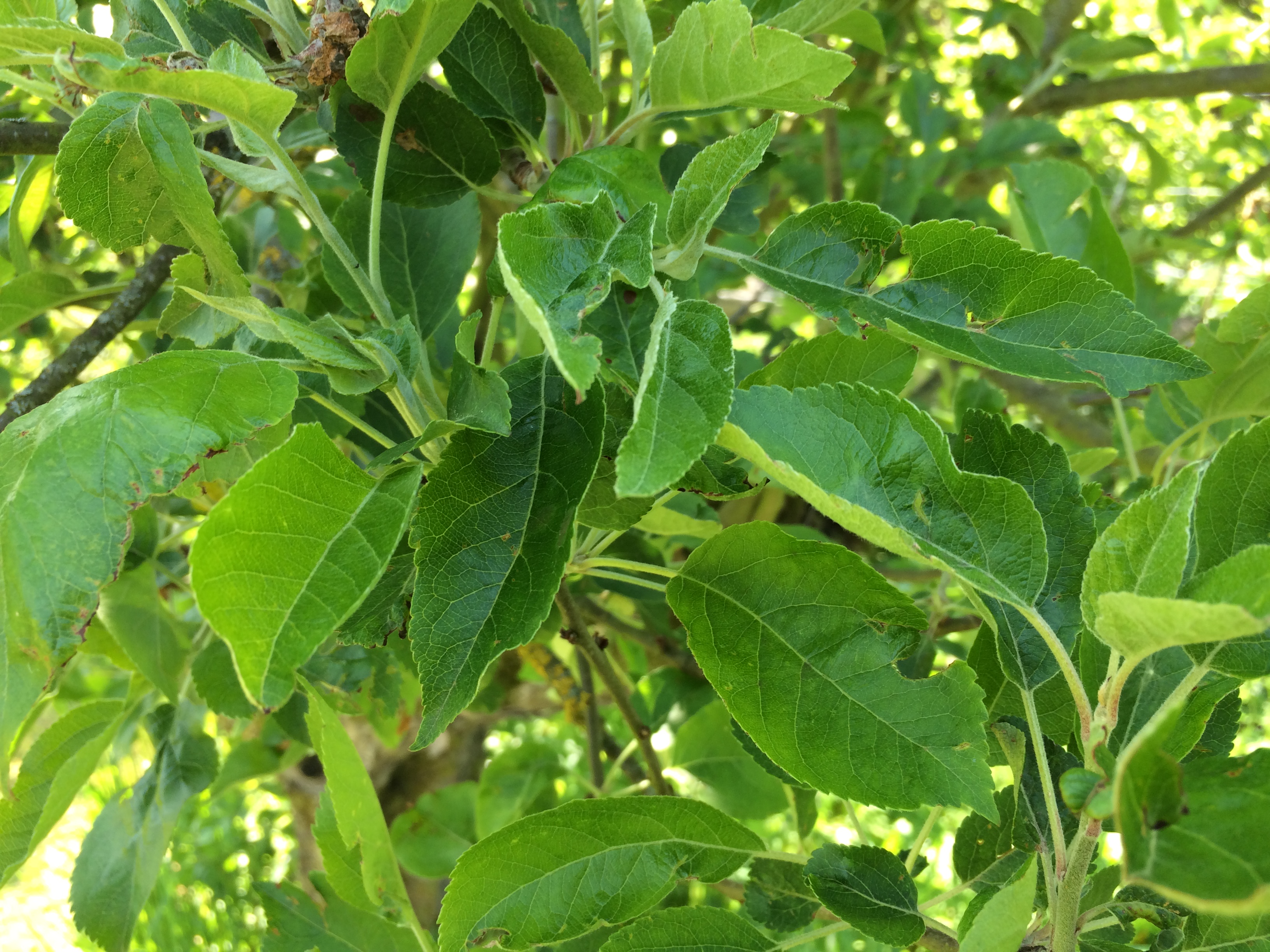 I make four kinds of cider:

The apple ciders are clean and crisp, with the apple flavour really coming through. The apple and pear ciders are super-fruity and complex.

As a small producer each batch will be slightly different - that's part of the joy of craft cider!

The main variations to look for are whether still or sparkling (or somewhere in between), the alcohol content, level of sweetness and more subtle nuances of flavour due to the exact blend of fruit used.

Contact me directly or look for updates on Facebook for details of the latest ciders available. Descriptions of the characteristics of each variety are found lower down on this page.

Fresh fruit juice - All my ciders are produced using 100% fresh fruit juice from our own orchards. The ripest fruit is used. It's collected when it is ready to naturally fall from the tree or hand picked. As soon as the fruit is ready it is washed, milled, then hand-pressed. There's no long storage period of the fruit during which the flavour would deteriorate.

Wild fermentation - Wild yeasts naturally occuring in the ancient orchard ferment the juice. These comprise a succession of several different yeast varieties, rather than a single strain laboratory culture, which is how mass produced ciders are made. Each variety adds its own nuance to the cider, giving a subtle complexity and characterful flavour. Although the science around exactly what is going on with wild yeasts is still in its infancy, indications are that every orchard has its own unique combination of yeasts. This gives a unique flavour signature to my cider that cannot be reproduced by anyone else.

No additives - when the cider is bottled in late spring or early summer nothing is added to the dry ciders, meaning that the only ingredient in these are fruit. For medium and sweet ciders a sweetener is used. No preservatives, such as sulphites are added. No flavourings, nor colourings, nor any 'E' numbers are added.

Live cider - No sterilising chemicals are used, so the ciders are 'live'. This means that a further fermentation can take place in the bottle, which softens the acidity of the cider, although, as we use bramley apples the ciders will always be quite sharp. The secondary fermentation also adds to the complexity of the cider, bringing subtle buttery tones.

Matured - The ciders are matured in the bottle, sometimes for over a year, giving them a vintage character. The flavours round off and become more mellow, but, given the vigorous flavour that they started with, they still pack a hefty punch to the taste buds! Each batch is tasted during its development to ensure that it is not sold until it is ready.

Vegan - no finings, such as fish scales, are used to clear the cider, so it's OK for vegetarians, vegans and fruitarians. The long fermentation followed by maturation in the bottle mean that the cider is clear at the point of sale. It can be easily shaken during transit, giving it a haze that will clear if the bottle is left to stand.

Unfiltered - the cider has a natural yeast sediment that forms as the cider clears in the bottle. For the sparkling ciders the sediment will be greater as they are 'bottle conditioned' i.e. they are bottled slightly before the fermentation is complete, so that it finishes in the bottle, producing the carbon dioxide that adds the sparkle. Ciders that mature over a sediment 'the lees' also acquire subtle flavour characteristics from this.

The ciders have a natural sediment as they are bottle conditioned. This has settled during maturation to leave a crystal clear cider. If the cider has been agitated then it may become hazy or even cloudy. Some people prefer it like this, giving them a scrumpy style farmhouse cider. However, if left to settle for a few days the cider should clear.

Store the cider somewhere cool, such as a pantry. It doesn't need to be kept in the fridge, in fact, over-chilling the cider will reduce the intensity of the flavour. The cider will keep well and may even improve a little, but eventually it will become past its best. As the cider has already been matured I'd recommend drinking it fairly soon after purchase.

To pour the cider off the sediment I remove the cap carefully, to avoid shaking the bottle. I elevate the bottle to eye level then pour slowly and steadily into slightly tilted pint glass. When I get near to the bottom of the bottle I slow down and when the sediment starts to move towards the neck of the bottle I stop pouring, leaving around a centimetre of cloudy cider in the bottle.

If you like a cloudy, scrumpy style cider its all a lot simpler - pour into a glass any old how and enjoy! Or even drink it straight from the bottle.

Welcome to the range...

The cider is made from apples from our very oldest trees, some around 100 years old.  The cider mostly uses bramley apples, but also included a mix of the other varieties of apple that are fully ripe at the time of pressing. This means that the blend of apples is unique to my orchard and will vary slightly from year to year, for added interest!

The cider is a golden straw colour and has a cidery aroma with subtle hints of fresh green apples.

It's made from bramley apples so has a sharp acid hit of fruit flavour on the first sip. The minerally character of the cider comes through next, followed by a clean crisp finish.

There are subtle complex tangy flavours derived from the use of wild yeasts in production.

The cider shares the same production credentials as the dry apple cider, but is sweetened to please those who prefer a sweet cider.

It's a pale golden colour and has an aroma of sweet dessert apples.

The cider has a rich fruity flavour. It really does taste like crunching into the sweetest apple, fresh from the tree!

It is a refreshing, easy drinking cider. It's highly quaffable, but it's worth sipping slowly to appreciate the complexity lying below the surface, with minerally undertones.

The cider is made using bramley apples and conference pears. The pears in the orchard all ripen within a very short time of each other, so the timing of juicing the fruit is critical.

The aroma is slightly floral and the cider is a clear, pale gold colour.

The apples give a sharp, crisp character to the cider that is combined with the gentleness of the pears to give a fresh, fuity and tangy cider. The sugars from the apples are fermented to absolute dryness, but a hint of sweetness remains from pears.

The cider is very drinkable, with a mellow nature and a smooth feel in the mouth. It has a fruitiness that starts with apple cider and finishes with a nutty pear-skin aftertaste. The initial impression is that of a zingy, refreshing cider, but further down the glass, as the palate adapts to the flavours, the underlying complexity becomes more apparent.

The cider is made in the same way as the dry apple and pear cider, but has sweetener added to produce an agreeable, easy drinking cider.

The cider has a pleasant, slightly floral aroma and has a clear, attractive golden colour.

The main flavour is a cidery fruitiness. It has a pronounced sweetness and a complex taste with both the apples and the pears coming through. The apples bring a level of tangy interest that combines well with the sweet flavours from the pears. The cider finishes with a nutty, slightly peppery taste of biting through a fresh pear skin.

There is some subtlety underlying the balanced, velvety quality of the cider and it's worth taking time over the drinking, but fans of this cider have said that it slips down dangerously quickly and is really quaffable. 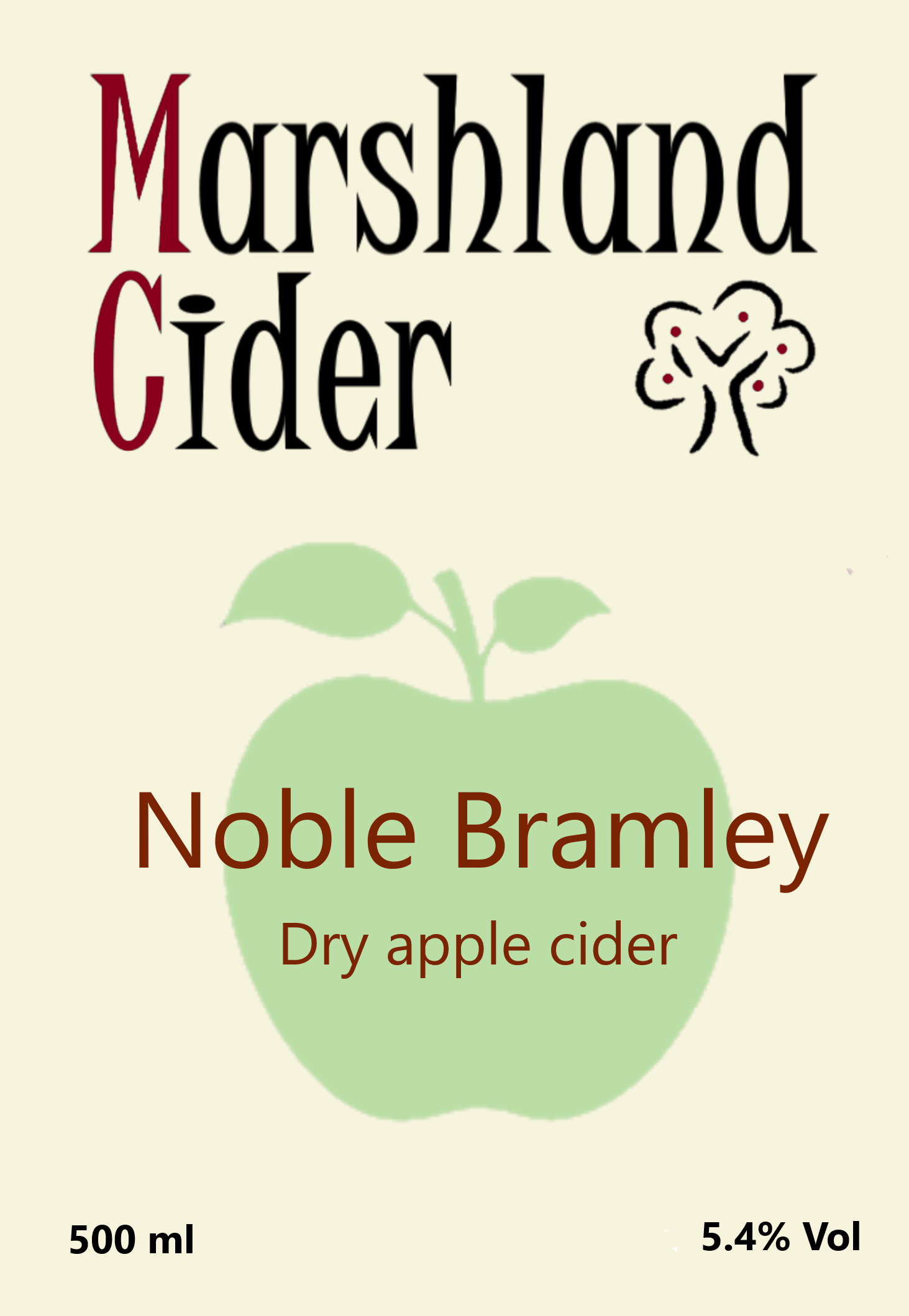 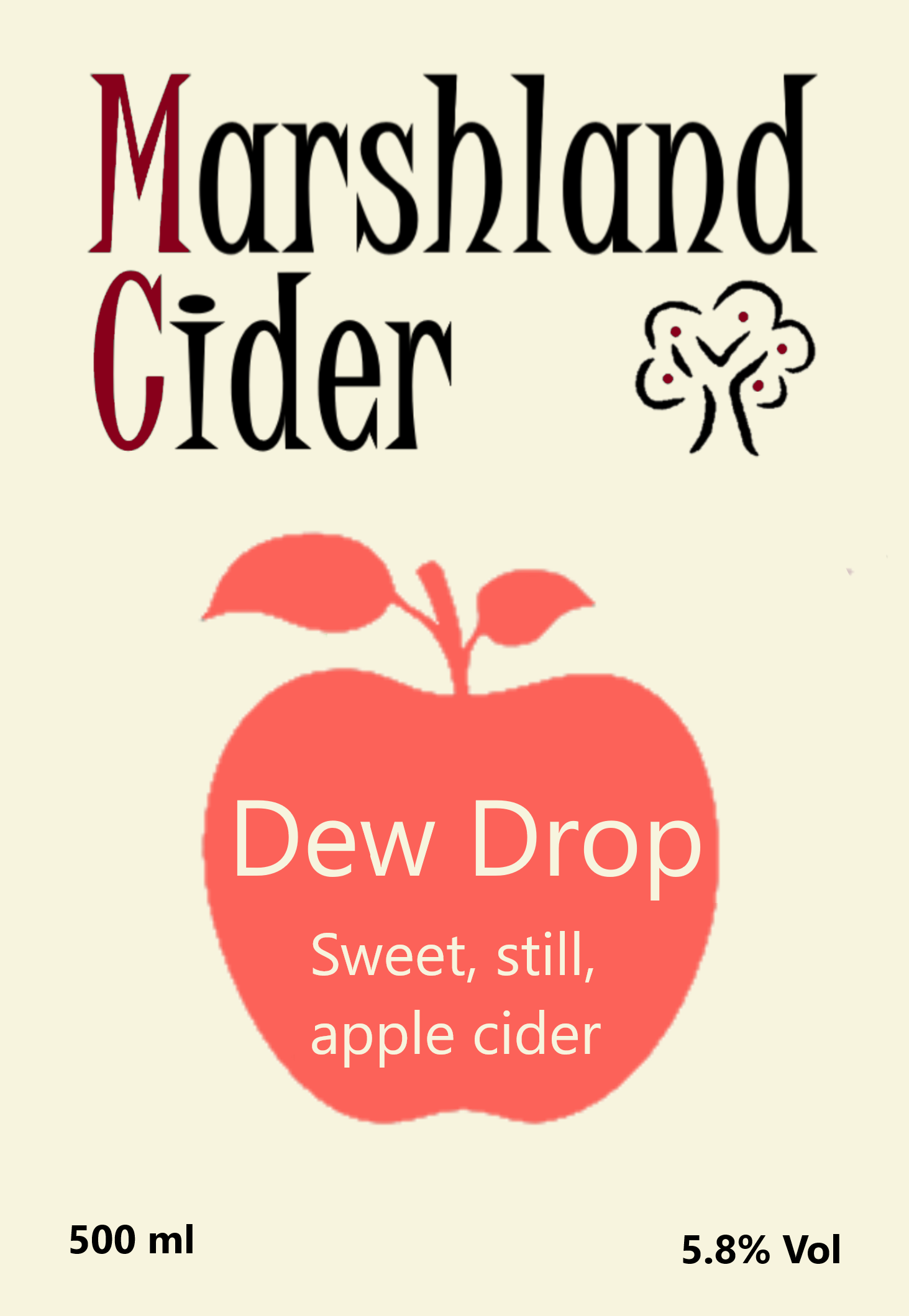 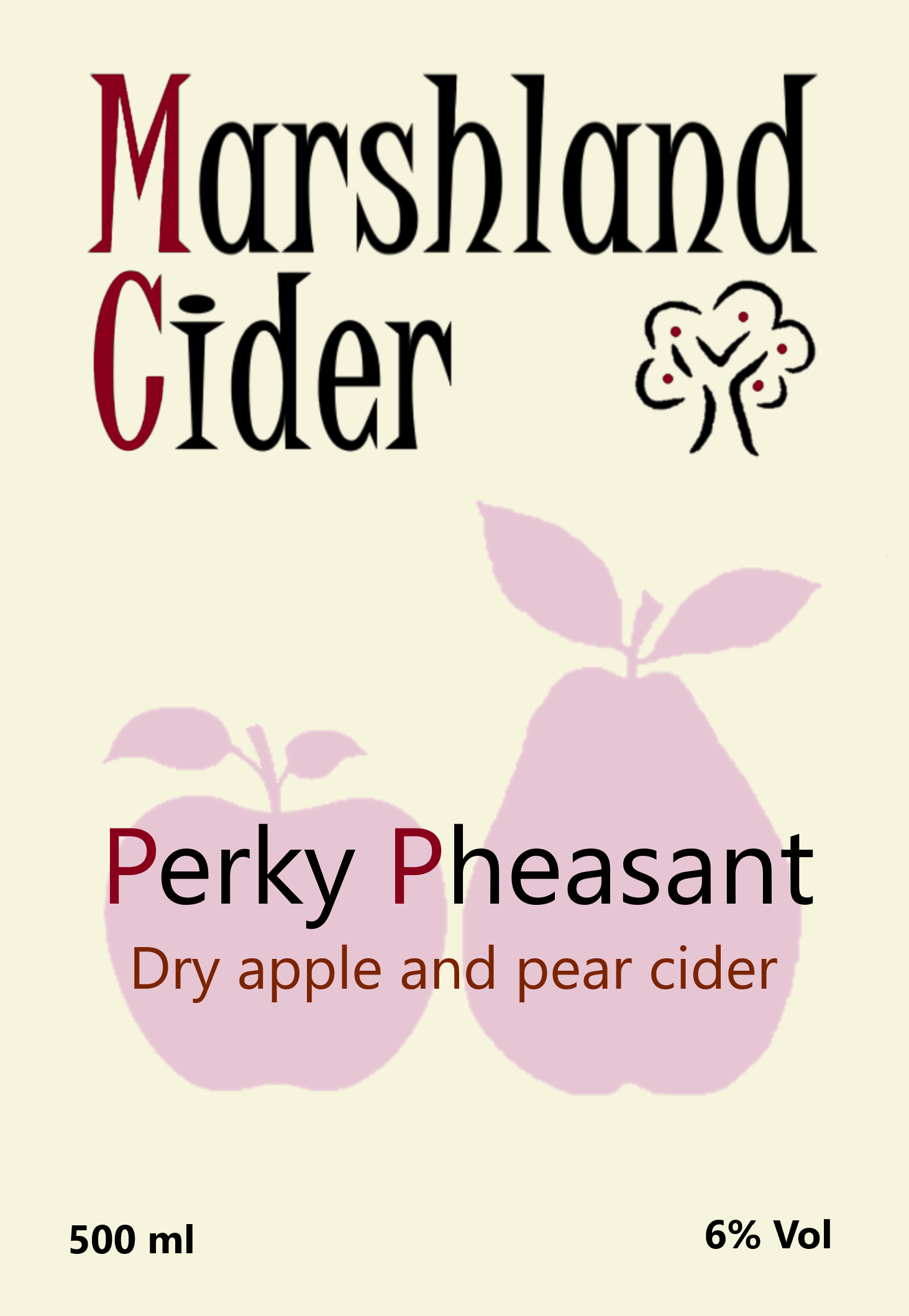 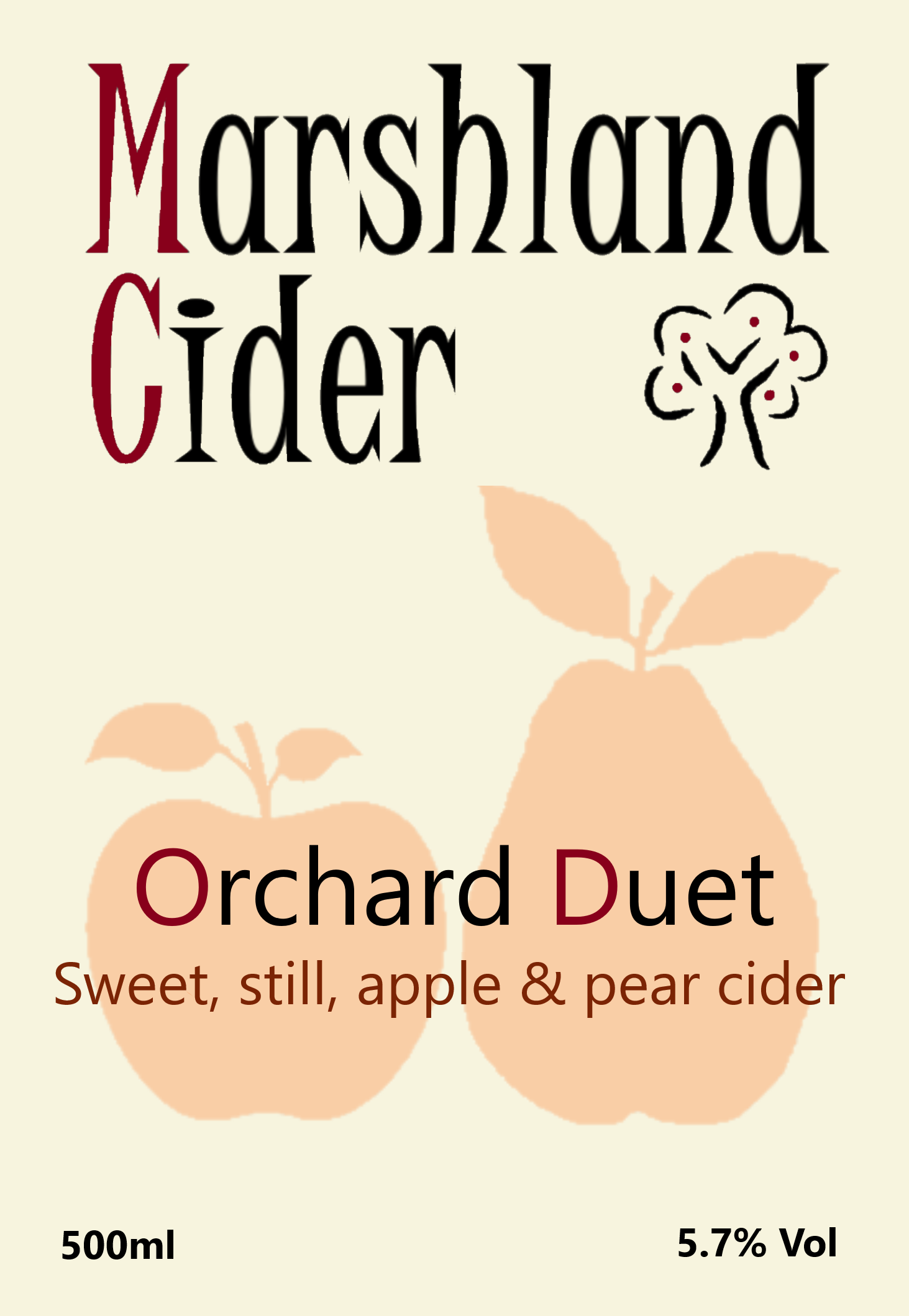 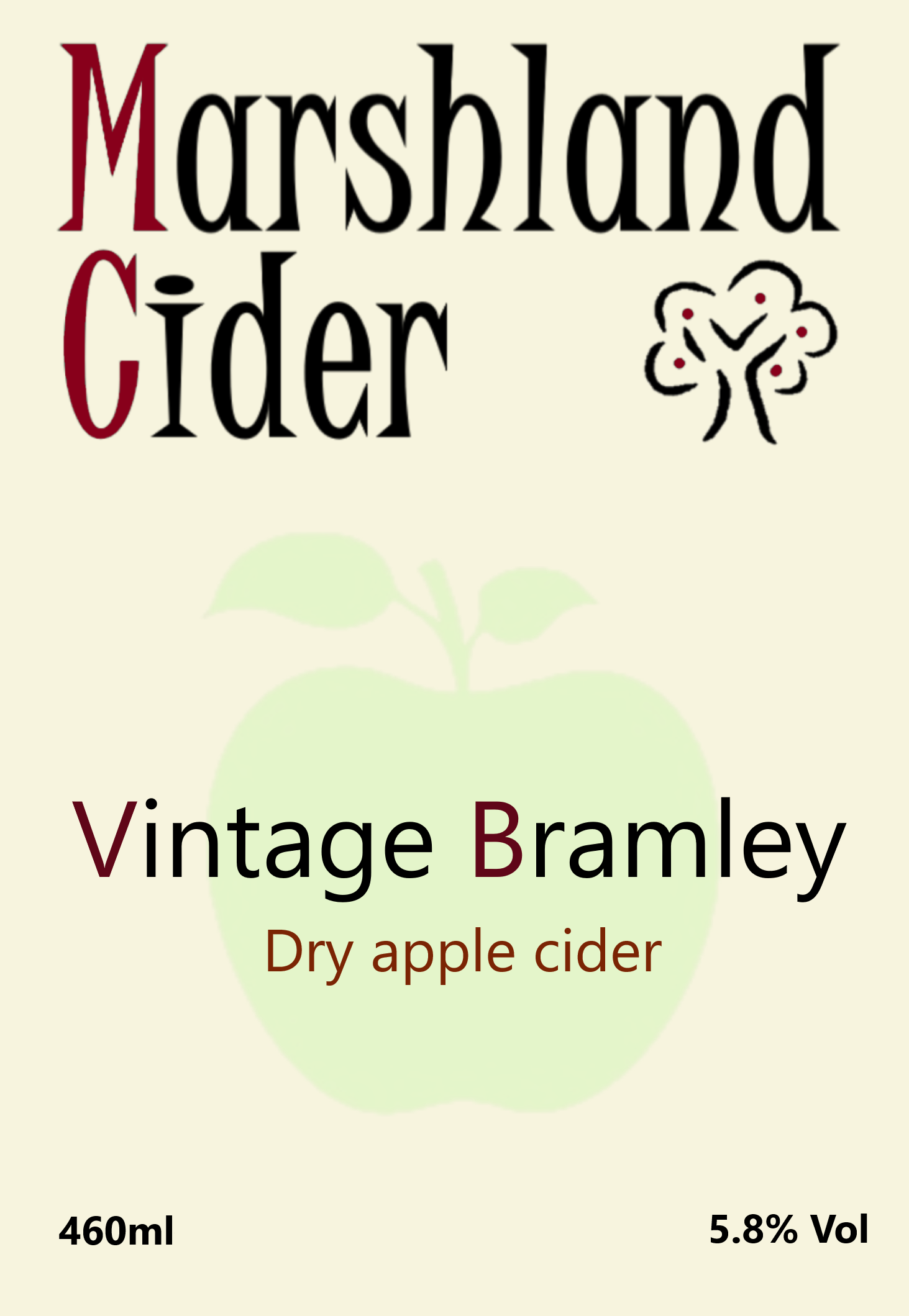 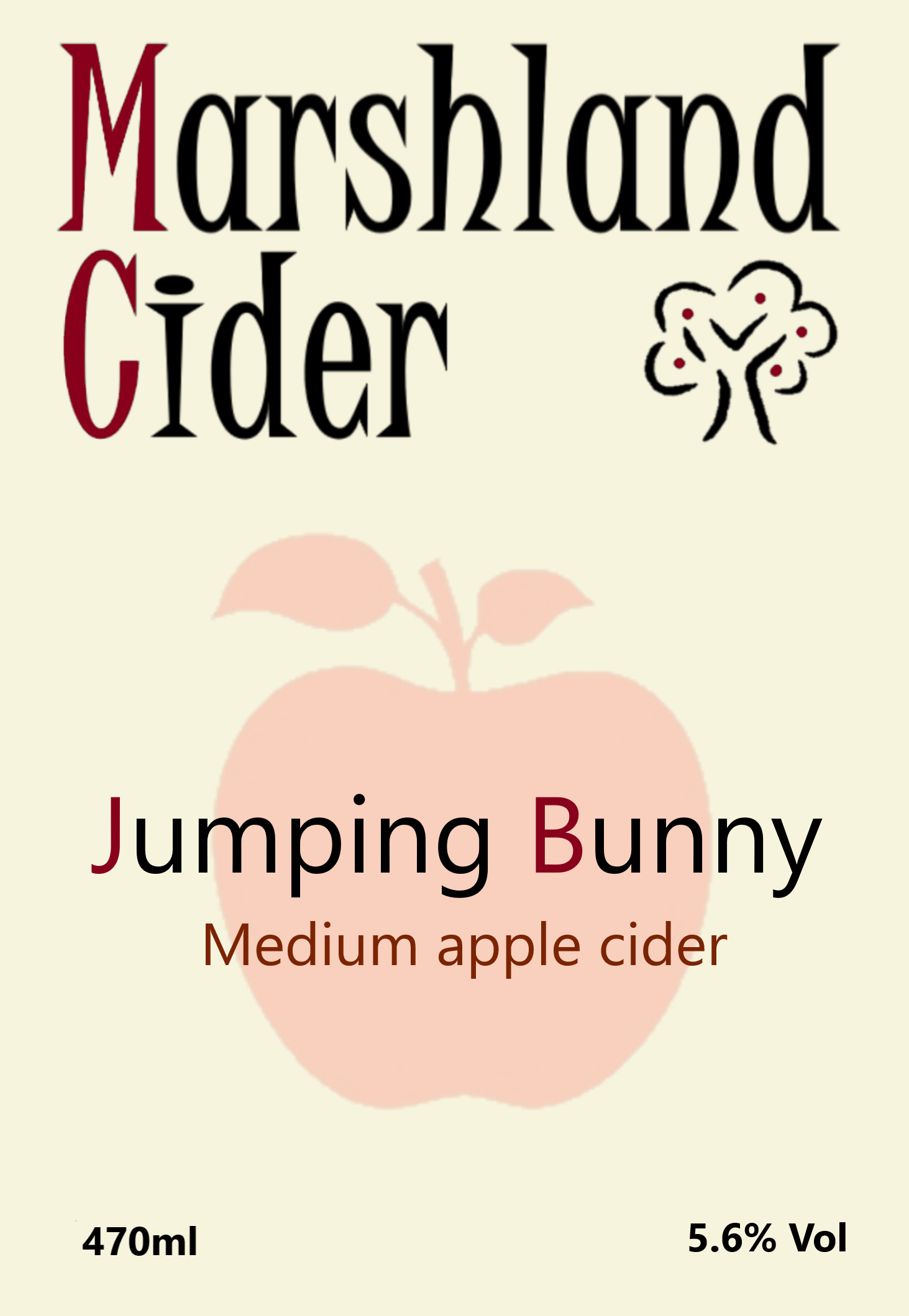 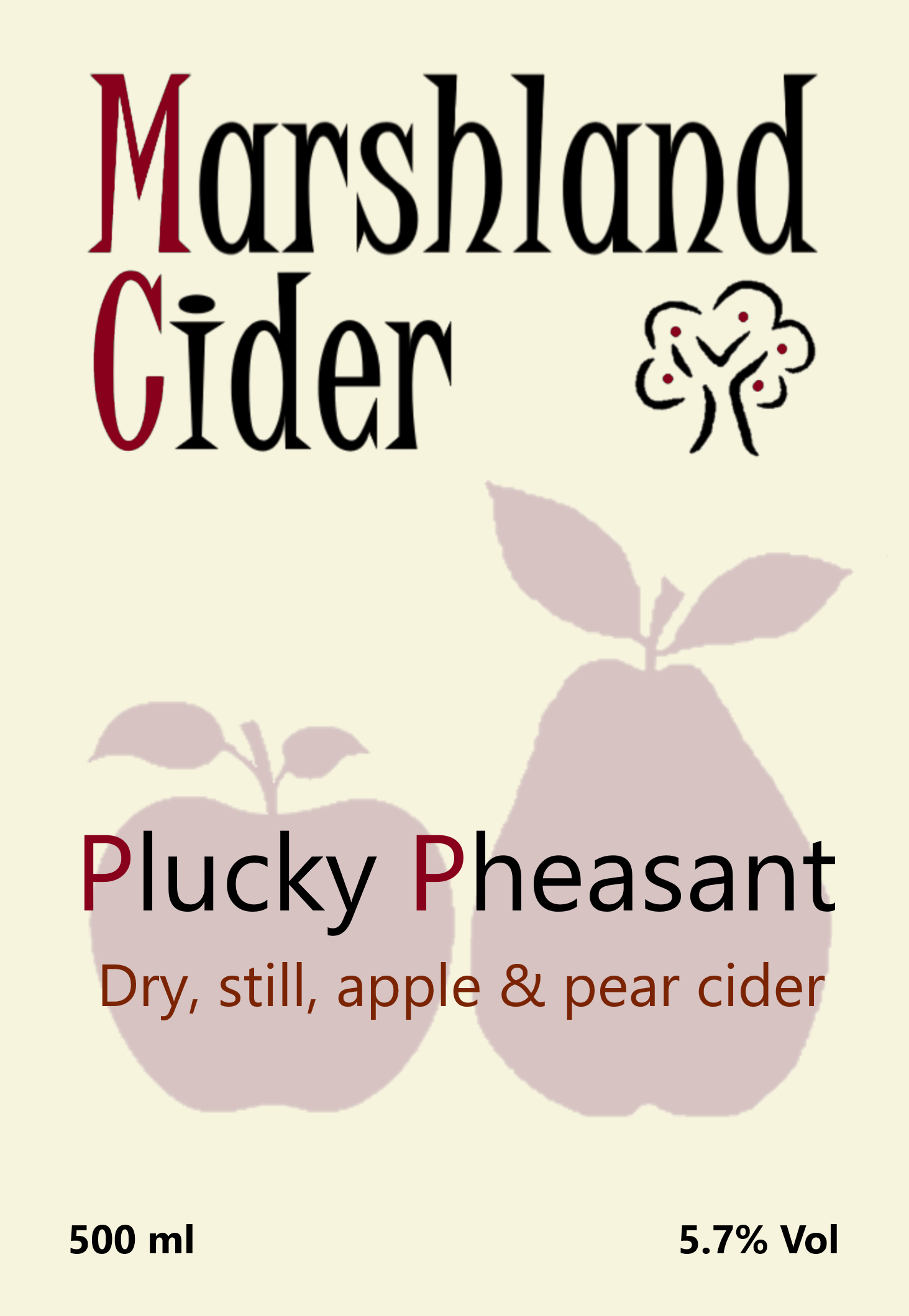 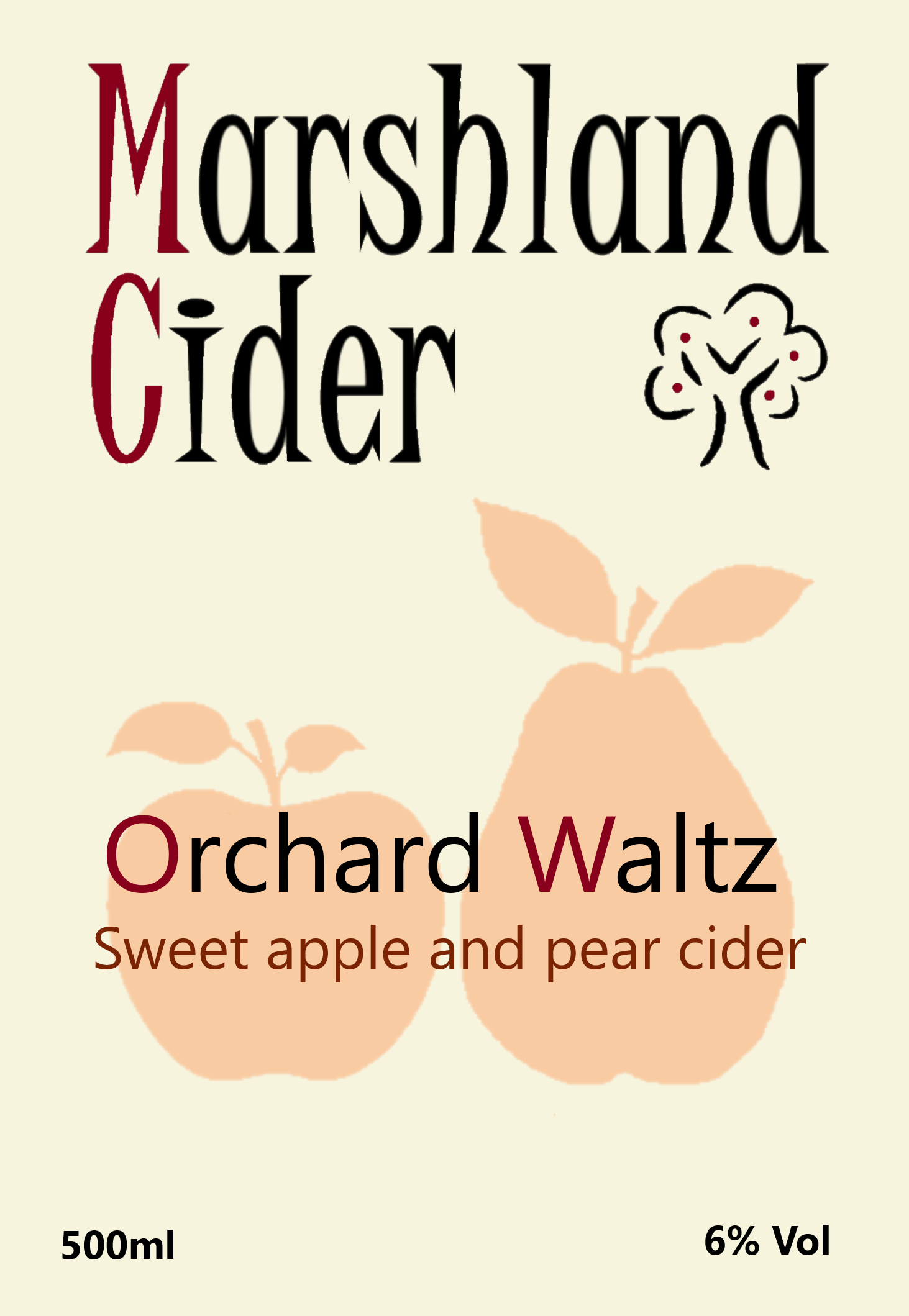